Eilidh and Stephen came! I count myself very lucky to have had the same core, family-like friends for over 10 years, some for 20, despite years living in different cities, countries, and now continents. Eilidh and I bonded age 14 over an indifference to Biology on the school Biology trip to Benmore, a strong resistance to actually taking part in P.E lessons (“we’ll just walk around the field- that’s exercise!” was our weekly conversation with the teachers) and later on a love of Vanilla Coke and Wotsits on a Saturday night, cheesy R&B music (the Honey soundtrack our CD of choice), and holidays to Zante, among other adventures of which there are simply too many to count.

13 years on and here they are! So of course having Eilz and her great boyfriend Stephen here is a delight. They beat jetlag head on and we began the road trip (round 3 is it now?) on their 3rd day, after taking in some sights and eats around Auckland. We all had a bit of a slow start as E&S’s campervan company wasn’t ready for the pick up time, and Adrien and I were living like locals and experiencing first-hand the legendary Auckland morning traffic- apparently news of the delays reach all the way down to Wellington water cooler chats, such is the intensity of the tailbacks. If that seems ridiculous, then consider taking 45 minutes to drive 2km before you’ve even made it to the city centre- not so hard to believe now, is it?

We met later in the day at the beautiful and incredibly photogenic Coromandel’s Cathedral Cove beach. This beach is truly stunning: large chunks of ignimbrite rock rise up imposingly from just beyond the shore, a cove separates 2 white sand beaches, and a track above the jungle leads you to all this magic. 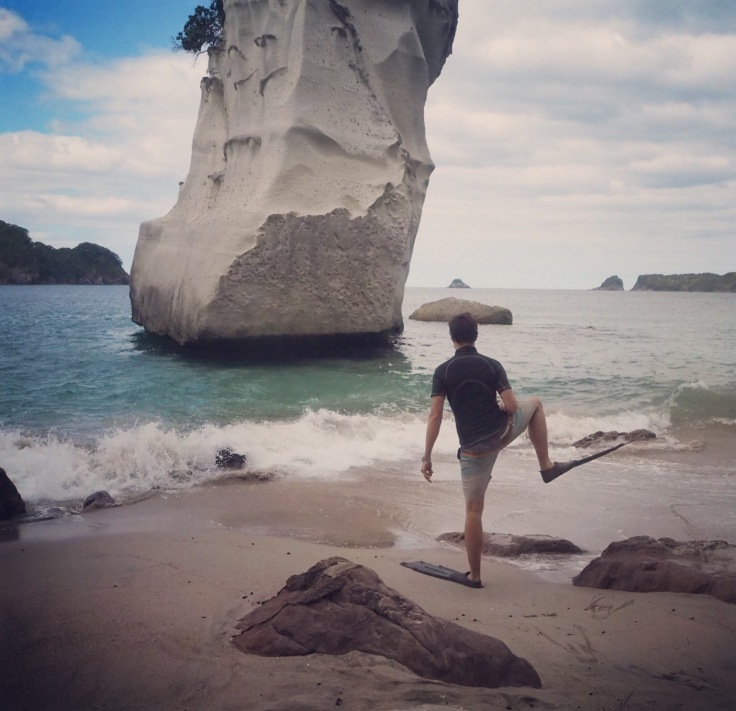 This may well be one of my favourite places in the country, I don’t even mind the busyness of the beach- how could I begrudge anyone wanting to take in this view?

Next stop was Hot Water Beach, next to which we found a good campsite for the 4 of us to stay in. Hot Water Beach is a stretch of bay where, in between two very specific rocks and only at low-tide, people dig pools into the sand and relax in their very own natural, bubble-free jacuzzis. I had fairly low expectations of how thrilling this would be, imagining only a lukewarm puddle for my tiptoes, but we headed down at 9.30pm with our dustpan for digging, and came across numerous pools of surprisingly (sometimes scaldingly) Hot Water, large and deep enough to lie down in! The next 2 hours were spent moving from one pool to another in search of the perfect temperature to lie down and look at the stars. It was a unique and totally New Zealand experience which we all loved! Until, of course, the age-old problem of Prune Hands reared its untimely head and we retreated to the campsite (via a quick dip in the crashing waves at midnight- another original experience I won’t be forgetting soon!).

The next day we made our way down towards Lake Taupō, popping in on some sites of interest on the way (gold mining ruins here, a waterfall there) and stayed for free next to a bizarrely warm lake in the car park of a geothermal site called Orakei Korako- in our (and many guide books) humble opinion, a somewhat overlooked contender for Best Geothermal Park Ever to Exist. This place is otherworldly, exotic, colourful, steamy, and smelly. It appears prehistoric but is in fact a mere 10,000 years old, and perfectly preserved (as far as we know). The track leads you safely around a 2km loop, as water boils below your feet, geysers erupt as you pass (if you’re lucky, which we were), mud bubbles and spits, and the smell of sulphur permeates your olfactories. It’s unlike anything I’ve ever seen, and although this was our 2nd trip here, we loved it just as much as the first time.

Other highlights of the week were the nightly rounds of card game Attack (made-up name), eating chez the Kydd-McKinnons in their Jucy van, and once the team parted ways- they headed South and we to the West- acquiring a SUP (stand-up paddle board), trying it out and falling in a lake, Adrien kitesurfing to his heart’s content (and not drowning despite a rather worrisome hour spent battling the current and me driving like a maniac to find him after he disappeared from sight), and discovering the awesome surf town of Raglan on the way back to Auckland.

But real life is beckoning us as our savings are crying out to be saved, so this week may be the moment we go from road tripping explorers to office clerks with a rent and a commute. I’m happy about this though, I think it’s time for a routine and it will be nice to settle down a little.

Hopefully we’ll have something along these lines to report on next week, so stay tuned for progress on our impending adulthood and responsibilities. Sounds like a hoot!